You should all have received a copy of the consultative document sent out by East West Rail (EWR). The proposals in that have profound implications for the village.

The following map shows, whether to the south or to the north of Cambourne, the village will benefit from access to a railway station. However, there are no plans to electrify the line and so diesel trains will be used. The line will also be used to carry freight as well as passengers. 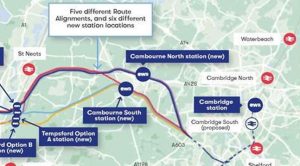 After leaving Cambourne, EWR’s preferred route has the line crossing the A428 and going south at Caldecote Highfields (blue line).

Two pressure groups (CamBed RailRoad and Cambridge Approaches) are promoting an alternative northern route which they would like to see get equal consideration with EWR’s preferred option of a southern route going to Cambridge South before a final choice is made. This alternative would again put the rail line, maintenance sidings and station for Cambourne north of the A428 before going on to reach North Cambridge.  In this the groups presently have the backing of the South Cambs MP, Anthony Browne, Cambourne Town Council and most parishes south of the 428 who would be affected by EWR’s preferred southern route.

What will be the impact of a North Cambourne station on Elsworth?

EWR previously proposed that Cambourne station be located to the south of the town. EWR has now indicated a ‘preference’ for the station to be located north of the A428, not for reasons of commuting, but because “there is more potential for new homes and communities in the area” (page 17 of the consultative document).
North Camborne is being actively promoted by a consortium which has options to buy the land (outlined on red on the map below). This was proposed as part of the Call for Sites for future development for the next South Cambs 5 Year Local Plan which will be consulted on later this year. However, it appears central Government is separately looking for housing development at the site of all new stations. 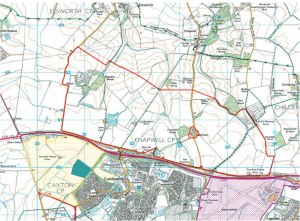 The red line shows the area that could be developed if planning approval is given. That could bring housing development to about 1.5 km (just under 1 mile) of Elsworth. The site is stated to have capacity for up to 10,000 houses at a density higher than in Cambourne.
This would mean perhaps up to 30,000 people (and tens of thousands of cars).
The developers and pressure groups are calling this ‘North Cambourne’ to hide the fact that it would be a new town (of the same size as Northstowe).

It is suggested that the land to either side of the area in red (towards A1198 or Dry Drayton) could be used for ‘mixed employment’ opportunities and/or further housing. Four primary schools and one secondary school are also planned.
The approximate location of the station and a transport hub (possibly with a park and ride) will be due south of Knapwell. To the west will be passing loops for freight trains, a possible maintenance depot, and sidings for storage of commuter trains.

The PC believes that, while the new settlement may offer some amenities, the scale of it and the siting of the station will adversely impact on our village in many ways, including:

The PC will consider the responses to the following questionnaire when putting together a submission on behalf of the village. This is very much a numbers game so, whatever your views, it is important that you respond as an individual to the consultation (https://eastwestrail.co.uk/consultation) so that the voice of parishes north of the A428 is heard.