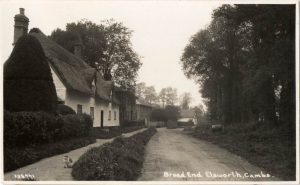 Geography of the parish

The parish covers approximately 1,554 hectares. (3,839 acres.) The land lies mostly upon Ampthill clays, overlaid over most of the southern two thirds of the parish by glacial boulder clays, and surrounding north of the village a substantial bed of Elsworth Rock (Jurassic limestone), from which flints for muskets were formerly mined. The rock contains numerous molluscs and ammonites and since the 1970s vertebrae of an ichthyosaurus and a dinosaur legbone have also been found in the village.

Where did the name come from?

In earliest times, the region was heavily wooded, and the first inhabitants were the Anglo Saxons. They settled in family clans under their leaders, Eli, Buce, Lole and Pappa, in ‘worths’ or small clearings in the forest, from which we get Elsworth. They were connected by tracks and waterways. Since the Middle Ages, Elsworth has been mainly devoted to agriculture.

How the population has changed

At the time of the Doomsday book, 1086, there were 250 people recorded. Elsworth was one of the most populous villages in the neighbourhood from the Middle Ages, escaping the Black Death in 1348-50, and by 1620 there were c. 500 people.

By 1728 the village had c. 100 dwellings occupied and in the 1760s numbers grew more rapidly to over 600. Records indicate that the peak was around 1841 when 878 were recorded but then the first emigration to America and Australia saw numbers start to drop, so that by the 1880s the numbers were under 640.

The church and estate at Elsworth were left to Ramsey Abbey in 1007 and was recorded thus in the Doomsday book. Land was leased to local men but there were also a high proportion of small freeholders. Browns Farm and Pitt Dene are 13th century farms.

The other village and putting up the king

By the late 13th century there was also a hamlet called Grave, sufficiently separate from Elsworth village to be styled a village c. 1290 and to have its own ale taster in 1321!  However, it was not recorded as inhabited after 1349.

Elsworth was close enough to the Old North Road to suffer in the Middle Ages visits from the king’s purveyors and other servants: in 1314 the reeve had to furnish hospitality to 23 of Edward II’s household, probably on the return from Bannockburn. 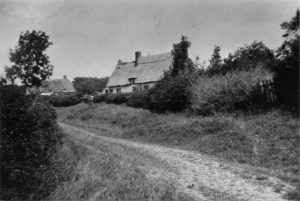 By the mid-20th century, the village still retained seven or eight timber-framed houses, their fabric dating mainly from 16th- or 17th-century rebuilding; Dears Farm is a jettied house of 1611, and Low Farm of 1595. Twelve other timber framed cottages probably date from the late 17th or early 18th century.

Ten high explosive bombs fell on the village on 16 November 1940. Whilst 12 houses were damaged and some villagers injured, the only casualties were 1 dog and 3 cats killed.

The Castle Acre field on Boxworth Road was the site of an open Prisoner of War Camp where German and Italian prisoners were held under the supervision of three privates and an NCO. No attempts to escape were recorded despite having bikes to use; presumably they enjoyed the work on the local farms

The village had several alehouses in the 14th century. In 1532 its alehouse keepers were forbidden to lodge strangers for more than one night.

The five public houses recorded c. 1770 included the Plough on Brook Street and the Three Horseshoes, both open by 1765, and the Fox and Hounds, a timber-framed house of c. 1700, at the northern end of the Brockley road. All were still open in the 1820s. 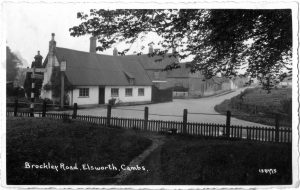 A beer house recorded by the 1850s by the crossroads at Caxton Gibbet, just inside Elsworth’s south-western angle, was promoted in the 1930s into the Caxton Gibbet Hotel.

The George and Dragon and the Fox & Hounds (now The Poacher) remain open.

Where do the names of streets, fields and farms come from?

Other names are descriptive of crops, animals and trades:

Lucern Close is where lucern grass was grown.

Orchard Close is the site of the Old Rectory apple orchard.

Brockley End is the way leading to a badger field.

The Brooks is the field carrying streams that run into the brook.

The Drift is an old cattle road leading to common pastures.

Rogues Lane was noted for highwaymen.

Smith Street points to the smithy at Forge Cottage

Duncock Lane is where the dunnock (hedge sparrow) nested.

Paddock Row is a row of cottages by an enclosed pasture.

The Church and Village of Elsworth, Cambridgeshire by Elizabeth Evans, Swavesey & District History Society is recommended for further reading on our history.